When the South Australian Constitution was drawn up in 1856, it was one of the most radical and democratic in the world. 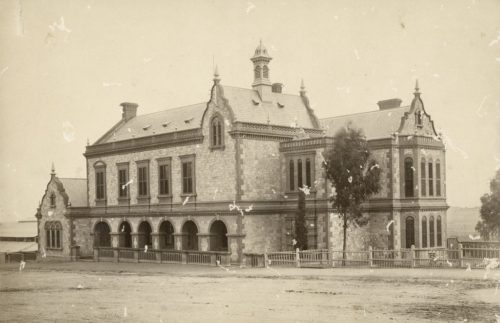 From the establishment of the colony the governor governed the people on behalf of the British Empire. Both colonists and the Aboriginal people had no say. The governor was advised only by a small legislative council appointed by the monarch. Dissatisfied residents pushed for a system by which the people had a say in how the colony was run.

In 1850 the Imperial Better Government Act empowered the Australian colonies to make moves towards responsible government – that is, government by the people. What would follow for South Australia was six years of public debate, discussion and decision making.

The first taste of democracy came to South Australia in the form of a partially elected Legislative council. From 1851 this was made up of eight members nominated by the governor, and 16 by male colonists who owned property. This form of democracy was limited at best, but an important step towards drafting and implementing a South Australian Constitution.

Debates about the new Constitution focused on how best to adapt the British parliamentary model (the Sovereign, the House of Lords and the House of Commons) to the particularities of the colony. Some aspects of the British system, however, were seen as in need of reform including who was entitled to vote. Under the British system the House of Commons overwhelmingly represented property-owning aristocracy until 1832, when the Reform Act enfranchised urban middle-class men. However working class men, particularly in regional and rural areas, continued not to have the vote.

Universal manhood suffrage – the vote for every adult male – was a key issue in not only the debates of the early 1850s but also from as early as European settlement. Advocates argued that adult men had a right to vote for those who made the laws they were obliged to follow.

The 1856 Constitution established two houses of Parliament in South Australia, with the lower house, the Legislative Assembly, elected by full manhood suffrage – all men 21 and over who were British subjects, including Aboriginal men, had the right to vote. The upper house, the Legislative Council, was also elected, but only by men who owned or rented property above a moderate threshold. Voting was to be by secret ballot.

“The political and administrative changes we have wrought, though achieved in the calmest and most peaceful spirit, amount to an organic revolution, and the people are as temperate in the enjoyment of their triumph as they are loyal and moderate in their demands.”

Revisions and changes to the South Australian Constitution would follow, including the enactment of female suffrage in 1894 and the lowering of the voting age from 21 to 18 in 1972.