In 1975, the rock star Alice Cooper was scheduled to tour Australia. John Bannon, later Premier of South Australia, was at the time senior adviser to Clyde Cameron, the Minister for Labour and Immigration in the Whitlam government. Their long association is documented in correspondence held in the Bannon Collection of the Flinders University Library, separate from the Cameron Collection papers also held in Special Collections. The Minister regarded the rockstar as a ‘degenerate’ and insisted that he would reject any visa application made by him. Years later, Cameron wrote to Bannon, “You always gave an honest opinion, and, when I felt unable to support your view (Alice Cooper, etc.) you never once sought to undermine my decision.” (26 December 1986 (BANN/038/Cameron01))

It seemed a sore point, as in 1995 John Bannon passed on the following explanation of the infamous live chicken episode. Being a simple city boy, Alice Cooper threw the chicken handed to him into the air, assuming it would fly away. To his horror, it fell into the audience and was trampled underfoot. (14 November 1995 (BANN/038/Cameron 01)). Despite his best attempts to suppress it, the incident became a publicity stunt. Twenty years after the fact, Clyde apologised to Bannon and fellow staffer Stubbs “for the hurt I caused by opposing his entry into Australia.” (17 November 1995 (BANN/038/Cameron01))

Clyde Cameron was a man who stuck to his principles.  He joined the Australian Workers Union in 1928 as a rouseabout in Kingston, South Australia. While a shearer, he won an official position with the Union in the 1938 election and by 1941 was State Secretary. In October 1948, he became a member of the Australian Labor Party and remained so until his death in 2008. He was elected to the House of Representatives in 1949, spending the next twenty-three years in Opposition. Under the Whitlam government in 1972, he became Minister for Labor and in 1974 the Minister for Labour and Immigration. In 1975, seeking help from the Right, Whitlam replaced him with Jim McClelland. After initially refusing to resign, he eventually accepted the position of Minister for Science and Consumer Affairs. Whitlam’s government was dismissed that year and Cameron remained on the backbench until his retirement in 1980.

In a letter addressed to H.H. Woodford on the topic of loyalty within the ranks, dated 8 August 1983, Clyde Cameron welcomes the opportunity to spell out the principles to which he has always adhered, stating, “I have never belonged to any other Party in my life and shall die a Labor man.” (8 August 1983 (BANN/038/Cameron 01)). In that letter, he describes John Bannon’s defence of his deputy, Jack Wright, as “a fine example of good old-fashioned Labor loyalty”, adding as a further example, “‘ It’s no test of loyalty’, Chifley used to say, ‘To stick to a colleague only when what he does and says corresponds with one’s own attitude.’“ (BANN/038/Cameron 01)

Much of Clyde Cameron’s prodigious post-parliamentary output (in a letter to Bill Guy in 1997 he listed seventeen pages of newspaper articles, papers, book reviews and books written to date) addresses the theme of Labor having lost its way. Max Harris, in a newspaper article headlined, “Shearing shed names – politicians for whom the ALP had more to do with comradeship than power”,  (The Weekend Australian, ‘Browsing’ column by Max Harris, BANN/038/Cameron 01) describes Clyde Cameron, Jack Wright and Mick Young as the last of the Henry Lawson men. While referring to Cameron’s reputation as “one of the great haters”, he also acknowledges his tolerance for some of his political opponents.

His reconciliation with Bob Santamaria is a case in point. In the Labor Split of the 1950s, Cameron supported Labor Leader H.V. Evatt while Bob Santamaria belonged to the right-wing Catholic faction, making them the staunchest of enemies. A feature article in The Weekend Australian magazine, 23 September 1995, was captioned “The end of the war” on the two former enemies’ new ideological kinship, despite never having met. Jim McClelland offered his comments in the editorial of the Sydney Morning Herald, 2 October 1995. “The Labor Party to which Clyde Cameron adhered to no longer exists,” writes McClelland. In a passionate defence of Santamaria, Cameron proclaims he is closer to Labor principles than the current power brokers, whom he elsewhere accuses of trying to curry favour with the Big End of Town. “I have always believed it is better to be right than consistent. My support for the Party’s Objective has been both right and consistent!” (17 October 1995 (BANN/038/Cameron 01))

It was for his adherence to the Socialist Objective that he felt targeted.  In 1992, Clyde Cameron began correspondence with J. Roger Holdich, Inspector-General of Intelligence and Security, insisting that he had been on the list of ‘Red’ suspects. ASIO denied that a personal file existed; Holdich later acknowledged that one had been opened in the 1950s but was presumed destroyed. Eventually, 81 files were found to refer to Cameron. Holdich tabled the complaint in his Annual Report 1993-1994. (BANN/038/Cameron 02) An interesting aside is that the 768 pages of Caucus minutes (1952 – 1969) which went missing at the time Whitlam’s sacking and were also presumed destroyed, were discovered in the National Archives of Australia in 2002. (BANN/038/Cameron 02) 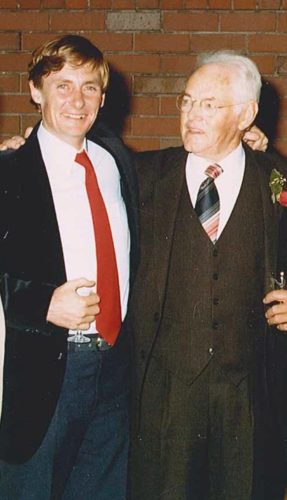 In a speech on Clyde’s ninetieth birthday John Bannon described the stalwart Labor man as “an indestructible and loyal friend, mentor and inspiration.” (11 February 2003 (BANN/038/Cameron 11)). By then, it seems, all had been forgiven regarding Alice Cooper. For his part, Cameron continued to value their long friendship, writing on 11 December 2000, “I always boasted that part of my success was due to my ability to recognise talent.” (BANN/038/Cameron 03) Ingrid is a Metadata Librarian in the Central Library at Flinders University. She has been part of a Special Collections project sorting the Bannon Collection and creating metadata for Libraries Australia. Another area of expertise is foreign language material cataloguing. She enjoys researching and writing.