There is a lot of discussion about citizenship throughout our country at the moment. From debates about migration and ‘Australian values’ to the so called ‘citizenship crisis’, a name coined by the media describing the several members of the Australian Federal Parliament who have stepped down, or aside, while confirmation and renunciation of foreign citizenship occurs.

The current political situation has to do with section 44 of the Australian Constitution, which you can have a look at here.

The purpose of section 44 is to protect Australia’s system of parliamentary democracy. The principles of disqualification were set forth in the development of the Australian Constitution in the decade that preceded its enactment into law to ensure that members of Parliament did not have a divided allegiance and were not subject to improper influence from foreign powers.

Citizenship issues are not new to Australian political debate. In fact discussions of Australian citizenship have been going on since Australia decided to federate, and before.

The term ‘British subject’ was the only official civic status detailed in the Australian Constitution. Delegates of the federal conventions of 1897-98 were unable to agree on a definition of the term ‘citizen’, and did not favour the American style ‘Bills of Rights’. The debates show strong South Australian support for a national citizenship.

What was being discussed was how federal rights would relate to provincial rights. It was decided that citizens who had particular rights within their colony, later state, would keep those rights but further obtain the rights of a ‘British Subject’ as described in the Australian Constitution. At the time of federation all citizens of this place were ‘British Subjects’, not ‘Australians’.

A South Australian member of the conventions Josiah Symon argued 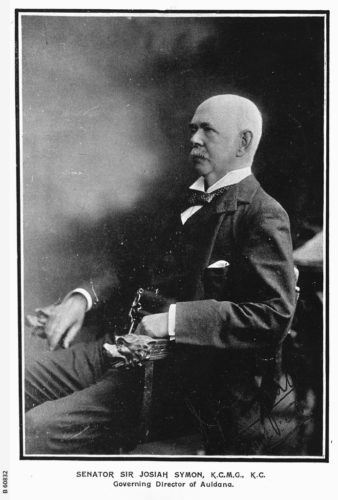 Portrait of Josiah Symon, State Library of South Australia, B60832

He went on to say

I am prepared to do what I can for the purpose of establishing a common citizenship within the Federation, and giving to each citizen throughout the Commonwealth, irrespective of provincial boundaries, common rights, taking away from the states the power which it is suggested should be retained by each state of singling out the citizens of other states of the Commonwealth for special legislation or special disqualification.

There were many differences between the states after the Constitution became law – for example women who had voting rights before Federation could still vote in commonwealth elections even if women in other states did not have that same right. This was the case for South Australian and Western Australian women.

The term ‘Australian Citizenship’ came into effect, and was made legal by an Act of federal legislation in 1948. The Nationality and Citizenship Act created an Australian citizenship and the conditions by which it could be acquired.

In his introducing the Bill to the Parliament, the first Minister of Immigration Arthur Calwell described its intention

It will symbolise not only our own pride in Australia, but also our willingness to offer a share in our future to the new Australians we are seeking in such vast numbers. These people are sure of a warm welcome to our shores. They will no longer need to strive towards an intangible goal, but can aspire to the honour of Australian citizenship … My aim, and that of the Government, is to make the word, ‘Australian’ mean all that it truly stands for to every member of our community. We shall try to teach the children that they are fortunate to be British, and even more fortunate to be Australian.

The act has been amended several times since its formation and you can read the current version here.

But, what I really want to know is what does Australian Citizenship mean to you? to the Australian people? to those who want to be Australian?

Is our citizenship a practical and legal phenomenon? Or is it something more?

Let us know what you think by commenting below.

Kalokerinos, J. Who May Sit? An Examination of the Parliamentary Disqualification Provisions of the Commonwealth Constitution*, Papers on Parliament No. 36 – June 2001