Workers organised themselves from the early days of the colony. It is alleged that the first industrial dispute occurred as early as October 1836 on one of the first ships to dock. South Australia company manager Charles Hare was strong armed into paying additional wages to seamen threatening to Strike.

Six or seven of the Emma’s crew Hutton, Barnet, Howland, Palmer, Thompson, Lyne, Cranfield, and others joined the men previously mentioned – and they held meetings formed societies etc. to coerce Mr. Stephens their first rule being to strike one and all when a man was discharged for any cause whatever and refuse to work until he was again employed.

Later it was builders, tailors and bootmakers that established some of the first unions in South Australia. From the beginning of s, co-operative and friendly societies insured members against sickness and unemployment.  In 1876 South Australia became the first British colony to legalise trade unions.

In January 1884 the United Trades and Labour Council formed to coordinate unions and have a stronger voice for better pay and reduced working hours. One of the original intentions of the council, to have political influence in the colony, was achieved in 1891 with the establishment of the United Labor Party, South Australia’s first political party. 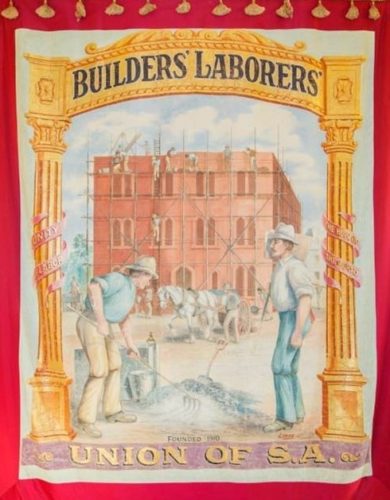 The banner displayed in the Centre of Democracy, and pictured in this blog, was used to represent the Builders’ Labourers’ union, South Australian branch in union processions. From the earliest of the eight hour day celebrations, banners were seen to be some of the most important contributions. A feature of the banner, created in 1910, is the depiction of the slogan ‘eight hours labour; eight hours recreation; eight hours rest’, which evokes the struggles and successes of the movement in South Australia. 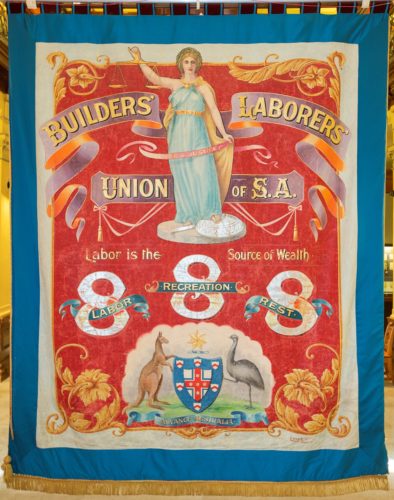