Women’s Suffrage was not achieved in isolation; there were other factors that influenced its development, success, and challenges. This month we explore women’s increasing participating in the workforce, and in particular the role of the Working Women’s Trade Union.

South Australia was the first place outside Britain to legalise Trade Unions, in 1876, and after fast-paced growth in 1884 the United Trades and Labor Council was formed to coordinate union activities and be a single, united, voice on the topic on unions[i].

In the mid to late nineteenth-century Australia, women made up twenty per cent of the workforce, rising to between thirty and forty percent in densely populated urban areas. While nearly half worked in domestic services, a sizeable amount worked on farms, within textile industries, as shop assistants, nurses and teachers.

Trade unions were dominated by men and women’s involvement in unions was limited, but crucial in the effort to improve the conditions of working women. By the 1890s eighty percent of women workers were employed in four main industries: “community services; wholesale and retail; finance, property and business; and manufacturing”[ii].

“A public meeting of ‘female workers in all branches of labour’ was held on Tuesday evening, January 14, in the Rechabite Hall, Grotestreet, ‘for the purpose of organizing a Women’s Trades Union.’ About a 100 women attended, together with thirty of the other sex, including members of the Trades and Labour Council.”[iii] 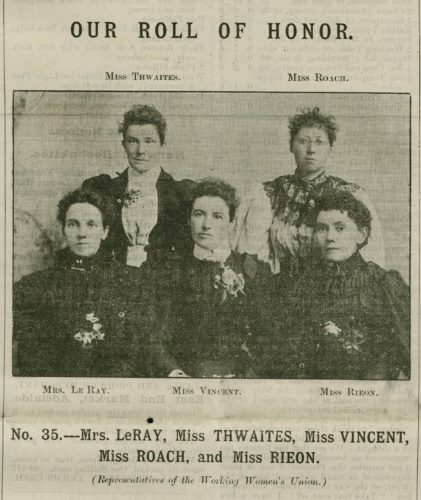 Members of the Working Women’s Trade Union, featured in the Weekly Herald, 13 November 1896.

Augusta Zadow was born in Germany in 1846 and is best known for her role as the first female inspector of factories, or as the papers reported ‘inspectress of factories’ and ‘lady inspector of factories’. She was a key figure in the establishment of the Union and its founding treasurer[iv]. In her roles she also investigated workplace complaints relating to wages, work safety and working conditions. She was “persistent, precise and practical in her investigations of factories, often writing into the night to finish reports.”[v] 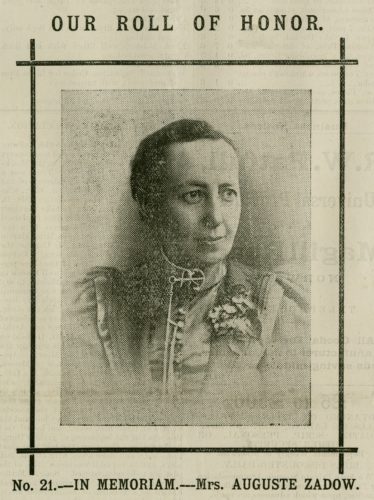 After the establishment of the Working Women’s Trade Union, Mary Lee wrote in a letter to The Observer “let us hope that the Trades and Labour Council will follow up their generous action by fighting for women the battle of the ballot”[vi]

Next month we will jump forward to August 1894 to learn more about a significant moment in the lead up to the achievement of equal suffrage in South Australia.

This blog post was researched and co-authored by Dylan Rowen and our Curator Craig Middleton. Contact Craig by emailing cmiddleton@history.sa.gov.au