What is a petition?

In a democracy a petition is a call to action. Petitions and petitioning were core strategies for the women’s suffrage movement in South Australia.

The South Australian Parliament explains that

“Petitioning Parliament is a long established fundamental right of all citizens. It allows any individual or group to place grievances before the Parliament. It is one of the few direct means of communication between the people and the Parliament.”[i]

Women’s Suffrage had it opponents and a petition tabled in the Legislative Council, and signed by fourty-four women attests to this. The petition was presented on Tuesday 14 August by the parliamentarian J.L. Stirling in response to the Adult Suffrage Bill. The petition claimed opposition on the following terms[ii]: 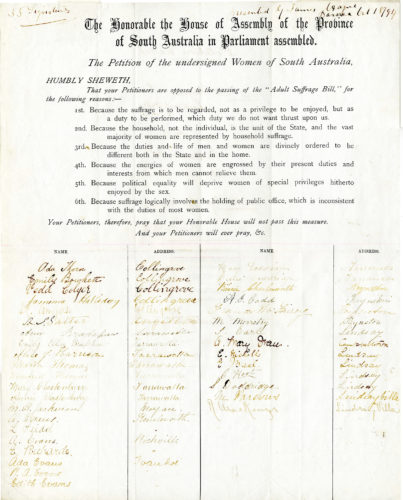 Just shy of 10 days later on 23 August another petition was tabled in Parliament, this time to the Legislative Assembly, by parliamentarian George Hawker, the then member for North Adelaide. This petition was much larger.

Signed by at least 11,600[iii] men and women from across the colony, from Kadina and Wallaroo to the South East of South Australia. This petition was “rolled up and tied with yellow ribbon”[iv], the colour of the Women’s Suffrage League in South Australia.

The effort of collecting the many signatures was not solely that of the Women’s Suffrage League but also of the Working Women’s Trade Union and the Woman’s Christian Temperance Union who collected at least 8000 of the signatures of which many were form country areas.

The petition was a huge turning point in the debates, and we will hear more about those later this year.

You can search the petition online and discover if any of your relatives signed: https://www.centreofdemocracy.sa.gov.au/suffrage-petition/